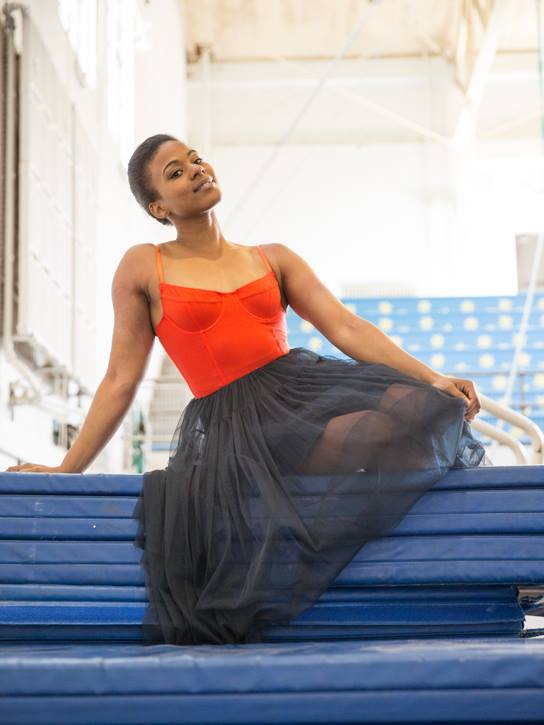 An aerialist of elegance and true excellence

Veronica Blair has studied with some of the most celebrated and prominent artists in her field, including trapeze great LaNorma Fox, Ringling Bros. first African-American Aerialist Pa-Mela Hernandez, and the renowned “God Father of the Tissu” Gérard Fasoli of Centre National des Arts du Cirque / Cnac.

Veronica started her acrobatic career at the age of 14 with Make*A*Circus, a community based circus. In addition she trained Chinese Acrobatics under Master Lu Yi with the San Francisco Youth Circus. Her first professional performance was at the age of 17, making her one of the youngest professional African-American trapeze artists in the U.S. Shortly after, Veronica was personally selected by Cedric Walker, the founder of Universoul Circus, as a single trapeze artist. Under Mr. Walker’s supervision, Veronica rapidly developed as an aerialist, and was the show’s resident aerialist for 5 years.

Veronica has since performed with several other renowned groups and productions around the globe such as AntiGravity, Universal Studios Japan and Warner Bros. Music. She has been a part of Germany’s most successful circus show, “AFRIKA! AFRIKA!”, and was the lead aerialist in KAMAU’s “BooDha” music video with over 100k views on YouTube.

Expanding her portfolio beyond performing, Veronica launched the development of “The Uncle Junior Project” in 2010. The ongoing documentary shines a light on the careers of African-American circus performers, including Emanual “Uncle Junior” Ruffin who remained largely uncredited for his contributions to American Circus until after his death. In 2017 she was invited to speak at the Smithsonian Folklife Festival about her experience as producer and director of “The Uncle Junior Project”, and served as organizer and moderator on a panel highlighting the African-American circus experience. She’s also worked with the African-American Art and Culture Complex to stage Entrapment to Entertainment: A Celebration of Blacks in American Circus, a three month exhibition that ran from October, 2013 – January 2014 with over 1,000 attendees.

Veronica is a truly professional artist, whose strengths reach far beyond the stage and into the heart of the circus and entertainment community.